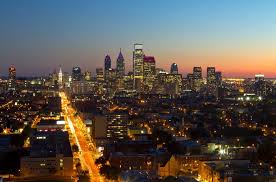 This New Year left me gasping for air, and even more water at 8 am when I woke up. Rushing around and avoiding all the litter and clutter on my house’s floor from the night before, a group of us took the subway heading towards city hall, which was packed full with people. 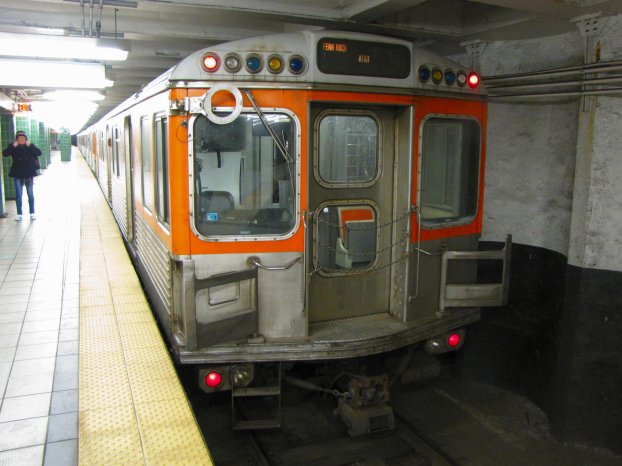 New Years Eve had left me drowsy and foggy. The motion didn’t make me feel the best and the screeching halt at each stop didn’t help my headache. We arrived at our destination a little after 9 a.m. and the festivities begun. This was my first ever Mummer’s Parade. The air was ecstatic, freezing cold, but filled with excitement. The Mummer’s are broken down into four divisions, with the Comic’s making fun of news or pop culture through skits and themes, the Wench Brigades with a bunch of men dressed like women, the Fancy Division boasting stunning elaborate costumes, and I didn’t see the Fancy Brigade as they were perform at the Convention Center. Eventually the String Bands appeared.

The String Band Division is the musical highlight of the Mummers Parade and the main reason why I woke up so early on New Years day. The other four divisions use recorded music or informal bands, whereas the String Band Division is made up of local groups, or competitive amateurs. Historically, this “sound” is comprised of saxophones, banjos, accordions, violins, bass fiddles, drums and the glockenspiel. For over 100 years this combination of reed, string and percussion instruments has defined the Mummers’ sound. Today was especially important to me, as my deceased Grandfather was a mummer.  After a morning of waiting, I finally got to see his old band, the Greater Overbrook String Band, preform for the first time in  my life.

With a, “Braziliant,” theme, the band appeared in a bright blue, pink, and green wardrobe with hints of yellow scattered throughout the costumes. 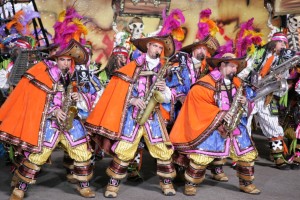 The song started slow, with an island sounding theme to it, slowly drifting through the cold until the music heated up in a cha cha like melody. “What was so great about it,” my Grandfathers twin, Uncle Dave, had said, “Was that each string band was comprised of so many different players with so many different talents. There are top-notch players who have been doing this for years, and then there were kids like your grandfather Paulie and I, just starting high school and being asked to perform through a friend. We’d start practicing in September once a week on Tuesdays and eventually we’d sound just as good as any professional.”

He was right, this group of amateurs [no professional can be a mummer] sounded just as good as the professionals. On New Year’s I was glad I made it, but sad to see another part of history fading. There are others like me, who had no prior experience or involvement in something so significant. Before I started writing this blog, I did a questionnaire around

Temple’s campus. The single question asked, “Why does the Mummer’s Parade come to Philly?” Now this question was asked at random, to random people on Temple’s campus. Some replied it was because of tradition. Others said because it was where the parade began, or a slight variation of we did the first parade ever. The most common answer seemed to be, “I don’t know,” which afterwards many then looked at me questioningly, seemingly to think that I’d blurt out the answer back since I had asked the question originally. As a grandson of a mummer, I myself had no idea and it seemed as if out of the twenty or so people I asked, only one knew that it was a European tradition brought over, adapted, and continued here in Philadelphia. Afterwards I looked at that person astonished.

President George Washington, who lived in the nation’s capital of Philadelphia, watched the British during the Revolutionary War, play a, “Mummer-like,” farewell party for William General Howe in 1778 as they occupied Philadelphia. When the War was over and he became President, Washington decided to continue on with this legacy. The word Mummer can be traced to Greek mythology as Momus, connected to the late Middle English word mommer, and the Old French word momeur. Each definition of the word relates to miming, masking and folk play. Mumming roots can even be traced to Egypt and Rome, making mumming a multi continental ancient ritual that in Philadelphia, apparently no one seems to know why it even happens.

In America’s past, Mumming has been banned, called racist, lost it’s grand prize from the city in 2008, and is currently dying. For the 100th Anniversary of the mummer’s parade in 2001, there were over 12,000 participants in the parade. This year that number has decreased by over 4,000 people and the parade route changed to accommodate the lack of an audience. I’ve realized that we as a City need to change our involvement in our current affairs and traditions. With so much present day connectivity, we are so unconnected to the past that a worldly cultural tradition, such as the Mummers, may soon die buried along with other cultures and ancestral roots long ago forgotten.

This entry was posted in Uncategorized. Bookmark the permalink.